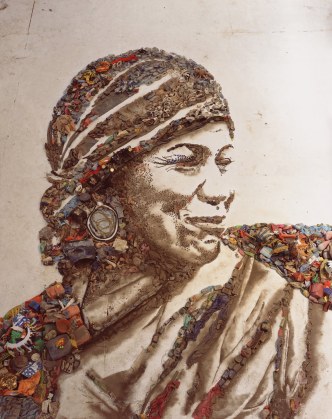 Vik Muniz is famous for creating artwork made from unordinary and unique materials. Muniz has made images using peanut butter and jelly, toys, junkyard materials, sugar and more. “Sugar children” was one of Muniz’s most important series of pieces in his career because it impacted a group of people and audience. The portraits made from sugar represented the Caribbean sugar children whose parents work 16-hour shifts in the sugar field. Similar to the significance of the sugar children, the Brazilian garbage pickers from Rio de Janerio’s Jardim Gramacho also sends a powerful message. The documentary shows the process of Muniz’s new idea to create a series of portraits using material from the world’s largest garbage dump in Brazil. The portraits of the pickers were made out of trash and recyclable materials on a large scale. Muniz used the materials from the landfill including the dirt to fill in the shadows. He engaged in the space of a whole building to mirror the photographs on the ground. The pickers helped place bags, toilets, shoes, bottle caps, baskets, dirt, and more thrown away materials to bring the images to life.His work gave the pickers pride in what they do and rewarded them for all their hard work. The proceeds from one of the pieces sold for over $50,000 dollars.

The documentary shows how equal humans are because whether you are rich or poor, your garbage goes in the same place. People rarely think about where there trash goes, so it is easy for them to sit around and constantly throw things away. The pickers do not view the garbage as reusable material rather than trash. They also see the material as money because it can be recycled. Many of the pickers have dreams like being a cook or librarian, but are currently working to survive. Muzis and the pickers use something that would be typically seen as ugly and showed it’s success.

“Wasteland” was an enlightening and honest documentary when revealing the life of a picker. I couldn’t imagine making only 20-30 dollars a day after digging through all the trash at the landfill. It would be hard as a picker to see all the reusable materials like books, shoes, clothes, blankets, and more items that people simply toss out. This documentary makes me more aware of the things I throw out and if I could recycle or donate the material to someone who needs it. Personally, I gained more appreciation for what I have and became more aware of the environment.

The inspiring stories of the pickers represent an impactful message through their portraits by Vik Muniz. Muniz is a creative and humble artist whose goals were admirable. The goals Muniz had during his process were to change the life of a group of people. After creating stunning portraits of the pickers out of the trash, Muniz gave the proceeds back to the people. Muniz stated how he already had everything, so he wanted nothing but to give back.

Muniz was an average person who cleaned up the dumpsters at work and grew up poor. Muniz has a positive view and outlook on life. He was able to achieve his dreams still after being in the middle of an argument he was not involved in and getting shot. I respect Muniz and his goals because this documentary was more about the overall mission andpeople rather than himself. It is uplifting to see the process of the pickers and their perspective of life. It was a shockingly beautiful process and an inspiring message to people about our environment and their daily habits.